Dr. Larry Levens has maintained a private practice specializing in Orthodontics since 1988. He is a leader and teacher in the field of orthodontics world wide, but his focus remains on his patients in St. Louis. Dr. Levens’ 25+ years of experience and his world class education, means the best results in less time for his patients. He is a firm believer in precision orthodontic care. From the very first consultation to the final results, you’ll notice attention to detail at every phase of care. His commitment to patients of all ages is to offer them the very latest advances in orthodontics. Patients can feel confident that they will receive optimal, compassionate care that is based on a solid educational background and years of experience. 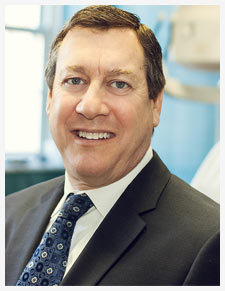 Dr. Larry Levens was born and raised in St. Louis where he attended schools in the Ladue School District. Following his graduation from Horton Watkins (Ladue) High School in 1978, he attended the University of Texas at Austin. In 1986 he graduated, with honors, from Dental School at the University of Missouri in Kansas City. He completed his Graduate Studies with honors at St. Louis University’s Orthodontic Department and received his Master’s Degree in Orthodontics in 1988. He has his specialty board license in orthodontics through the Missouri State Dental Board. He feels fortunate to have had the opportunity to practice orthodontics with his father, Dr. Philip Levens, prior to his retirement in 1991. Dr. Levens says his dad always took time to discuss diagnosis and treatment planning, exposing him to the field well before he began his formal dental education. Dr. Levens is currently the only orthodontist in the USA with dual specialty degrees in both Orthodontics and Lingual Orthodontics. He was one of only 6 accepted to his program at the Medical School of Hannover in Hannover, Germany and the only one ever from North America. There he studied with luminaries in the field of Lingual Orthodontics (braces on the back of the teeth) and directly under two doctors who are considered two of the best orthodontists in the world. In 2012, he graduated with honors (“Sehr Gut”) from MHH and received his second Master’s degree (MScLO) in Lingual Orthodontics and was also awarded a German national prize for original orthodontic research (the Volker Rummel Award). Dr. Levens and his wife Debby reside in Ladue and have three children Jake, Zach and Grace. He has attended St. Louis University’s School of Law and has also earned his Commercial and Instrument Airplane license just for fun. He enjoys tennis, reading, running, biking and golf, but especially takes pleasure in spending time with his family.

Ready For Your New Smile?